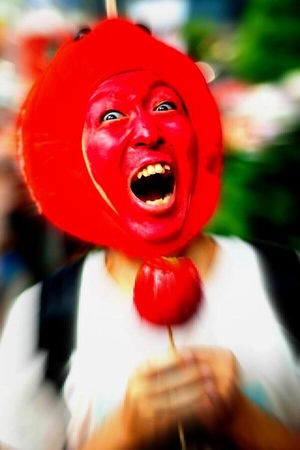 He’s the savior of Aomori! The defender of Hirosaki City! He’s …. APPLE-MAN!

Other cities might have their adorable mascots that are promoted by the city, licensed to make toys for children. Hirosaki City, on the other hand, just has this guy.

In all honesty, Apple-man (no one really knows his name) was born in Tokyo and only recently moved to Hirosaki City in Aomori.

He cites the reason as the friendliness of the citizens of the city that inspired his move to the land of apples.

His mission, according the residents, seems to be to promote the apple festivals of Hirosaki by selling his home-made candied apples.

Next time you’re in Aomori, make sure to try and find Apple-man. He’ll be out there somewhere bringing joy (and apples) to citizens!

I’m a tour guide today for foreigner tourists. Welcome
to Hirosaki.May I help you？ pic.twitter.com/IjjwGj5fU6