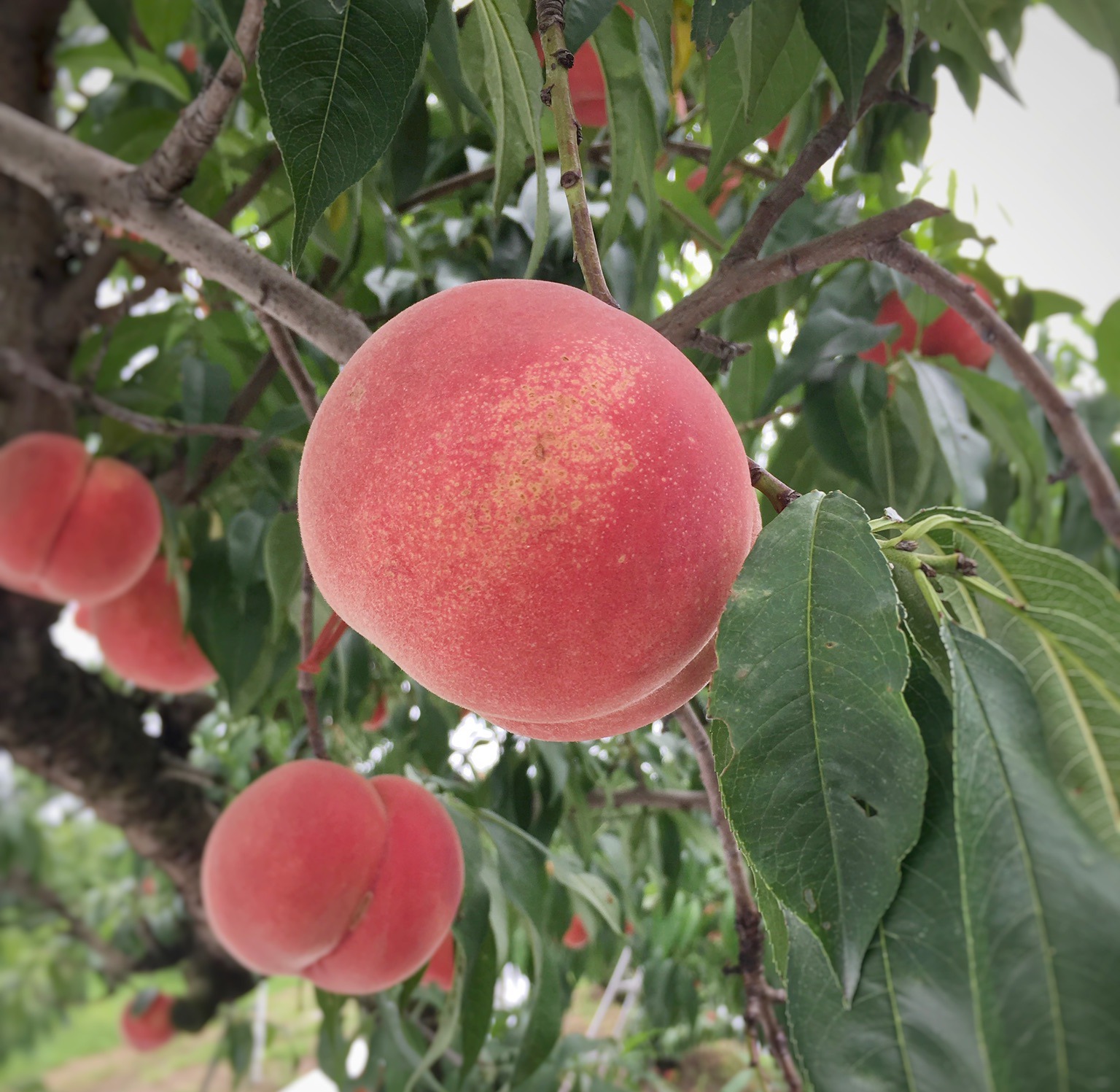 In the northern part of the Fukushima Prefecture in a town called Korimachi I heard a rumor that there was something called a “Peach” tour and decided to participate.

When we’re talking about Fukushima Prefecture it is known that they are ranked 2nd for the growing and output of peaches within Japan, but when talking about the quality of the peaches that come form Korimachi it isn’t an overstatement to say that they are the best in Japan.
During today’s report I would love to introduce to everyone what this “Peach” tour was like and what it entailed.

The start was the town’s symbol, the “Former Date ward office” 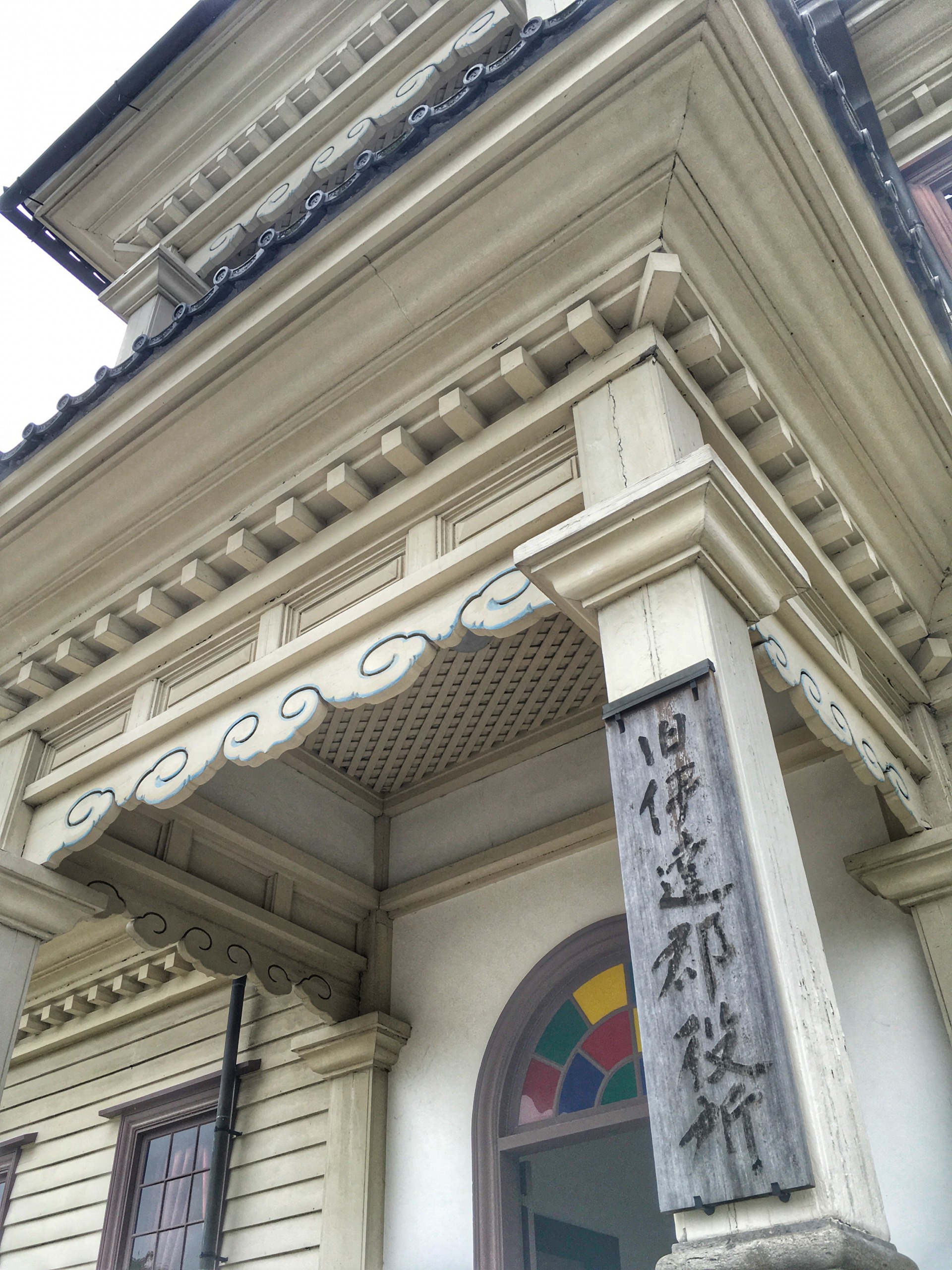 After leaving Sendai the first thing that I visited was something that can be called Korimachi’s symbol, the “Former Date ward office”.
After arriving here, we were given an explanation about the tour itself and also took a group photo with everyone that had gathered.
This building was built back in the 12th year of the Meiji era (1879) and was demolished once but then reconstructed back to its original state during the 54th year of the showa era(1979).
It was closed for a short period of time due to some damages from an earthquake, but was then re-opened to the public from 2014. 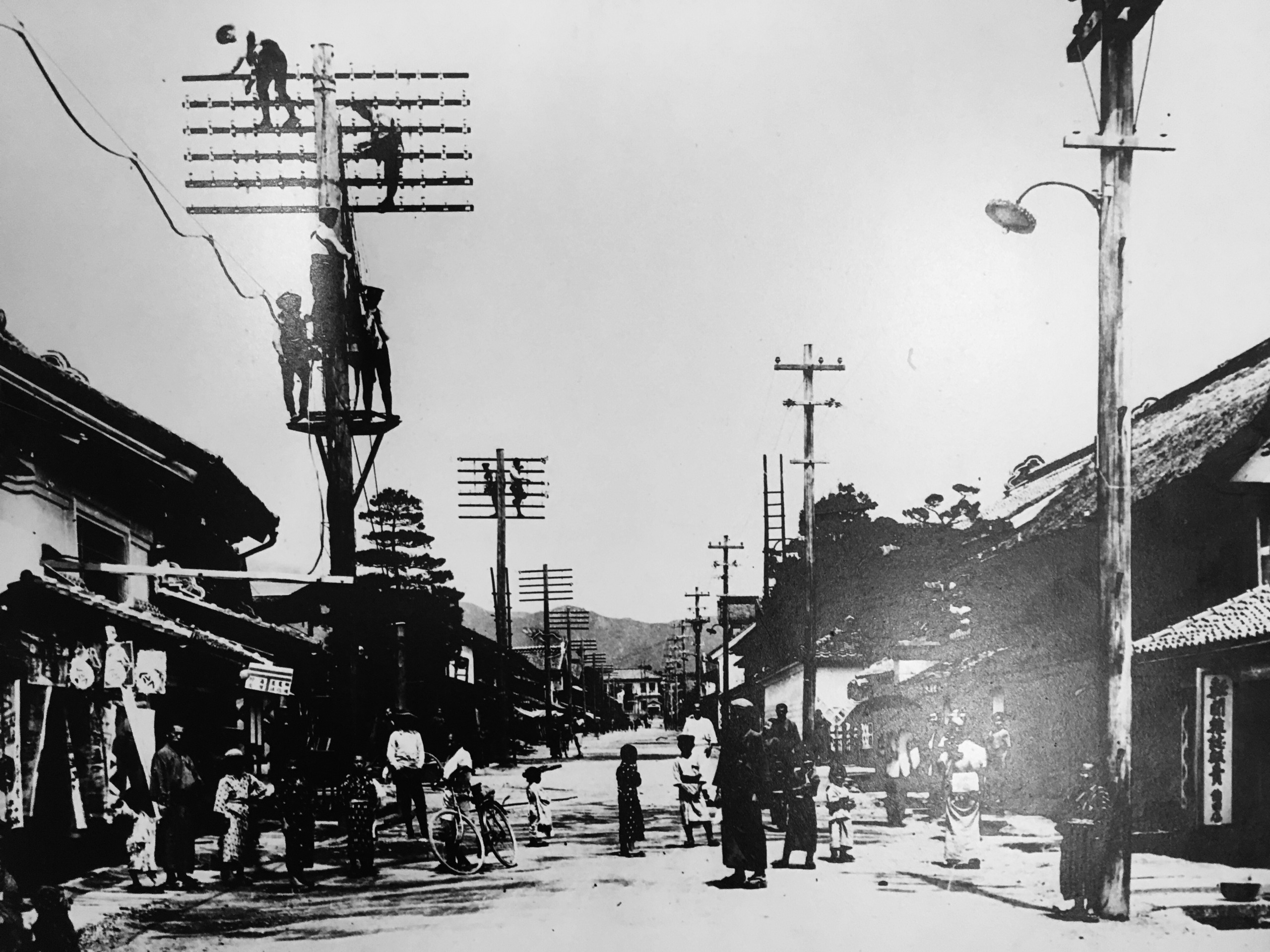 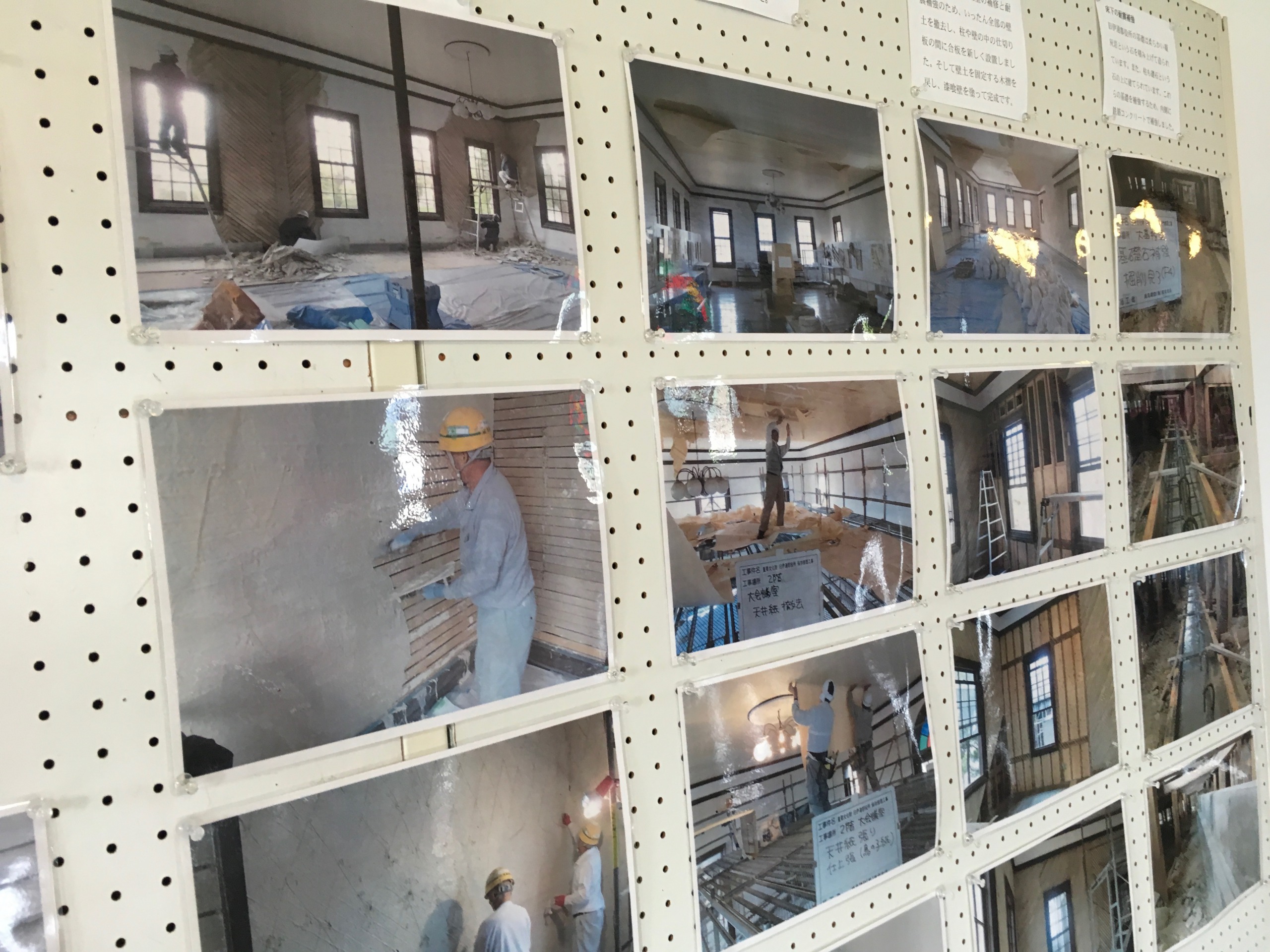 Inside of the building there are photos of the town in earlier years as well as some vivid images of the earthquake disaster. Definitely a suitable place to learn about the history and circumstances of the Fukushima Prefecture. 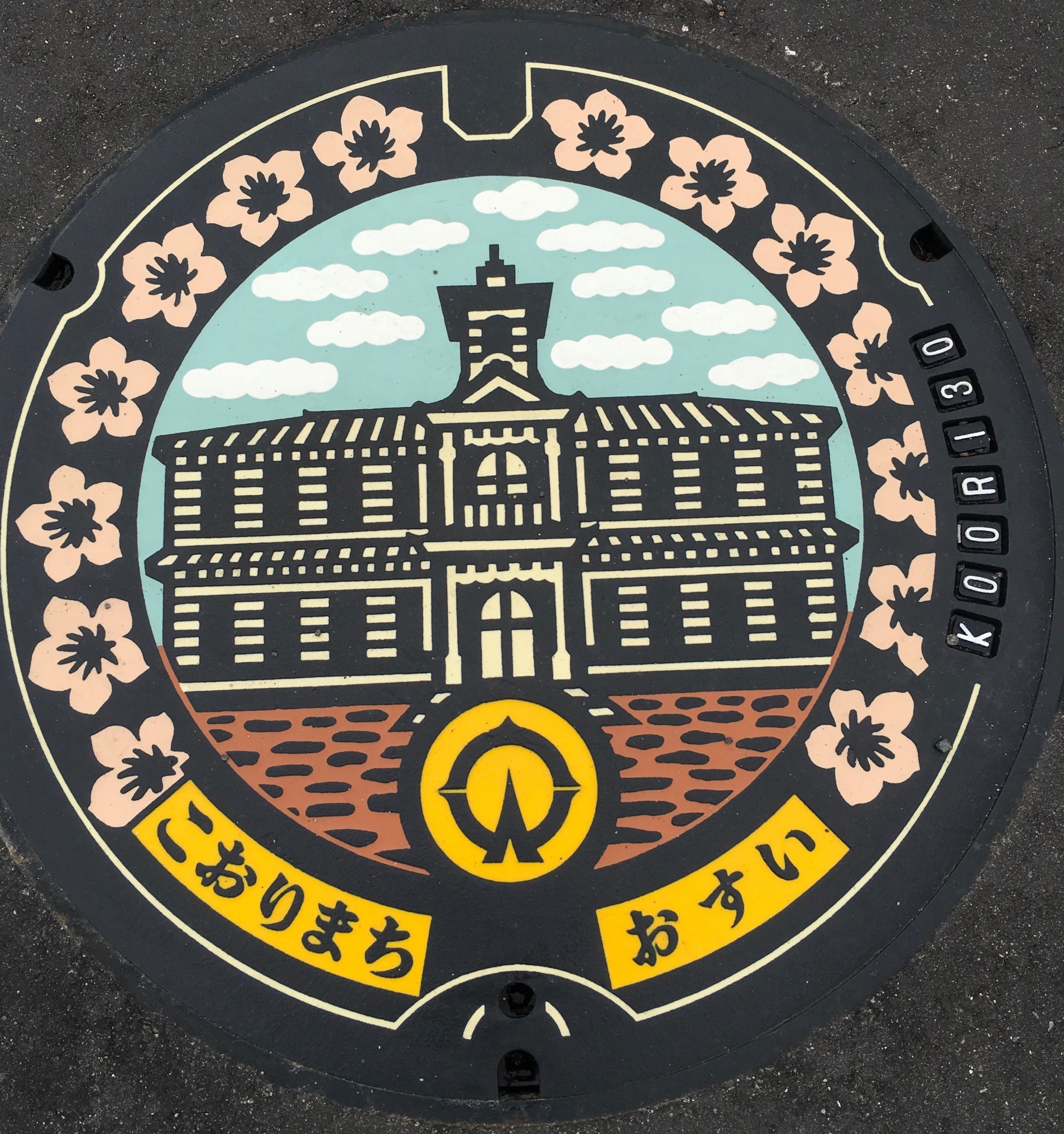 Quite close to the entrance there is a lovely little manhole that you can see that has the former Date ward office pictured surrounded by blooming pink peach flowers. This was something created by the towns people! 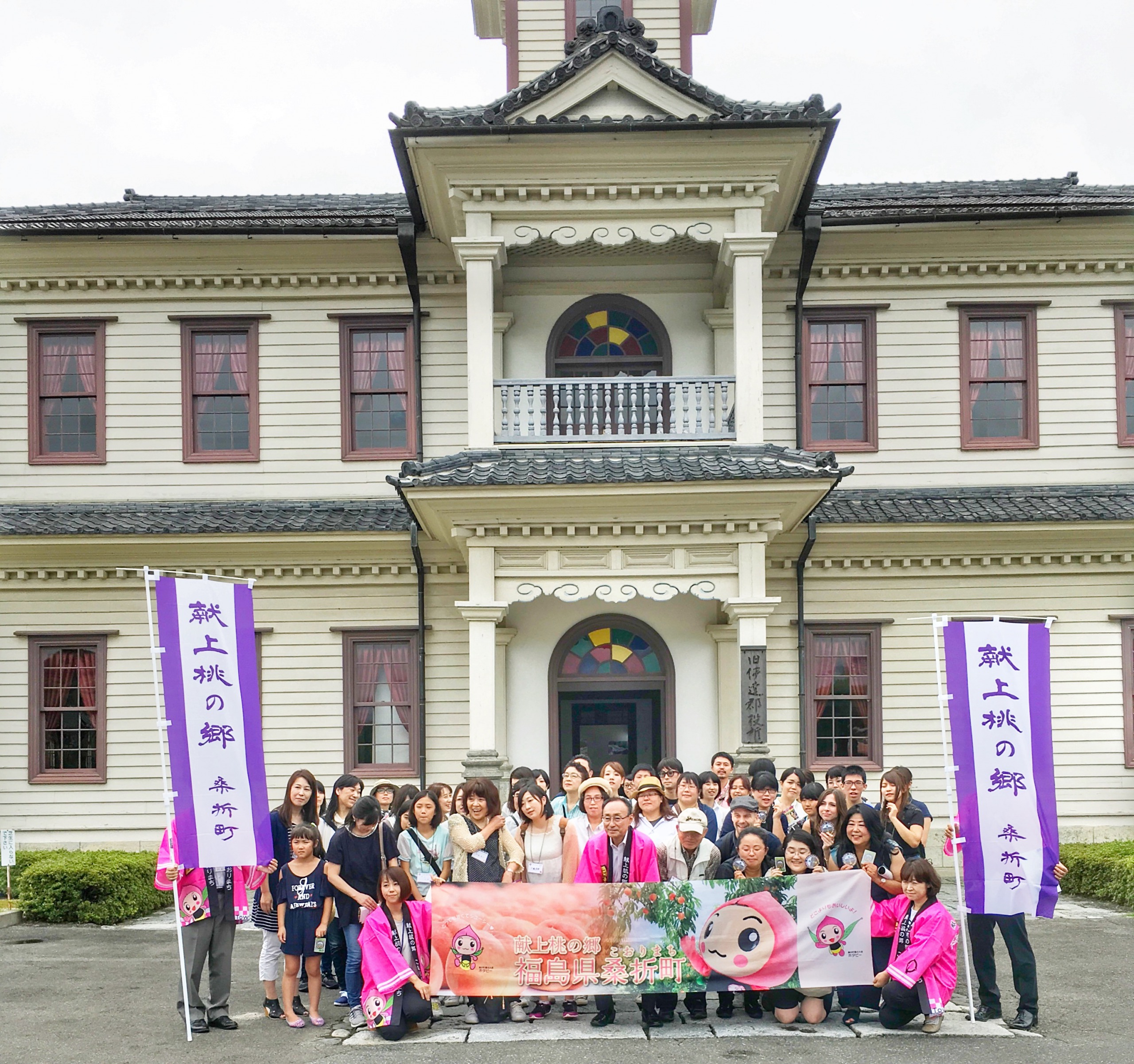 The selection process for the peaches

The first thing we were shown was the area where they select which peaches are good for sale after being harvested. 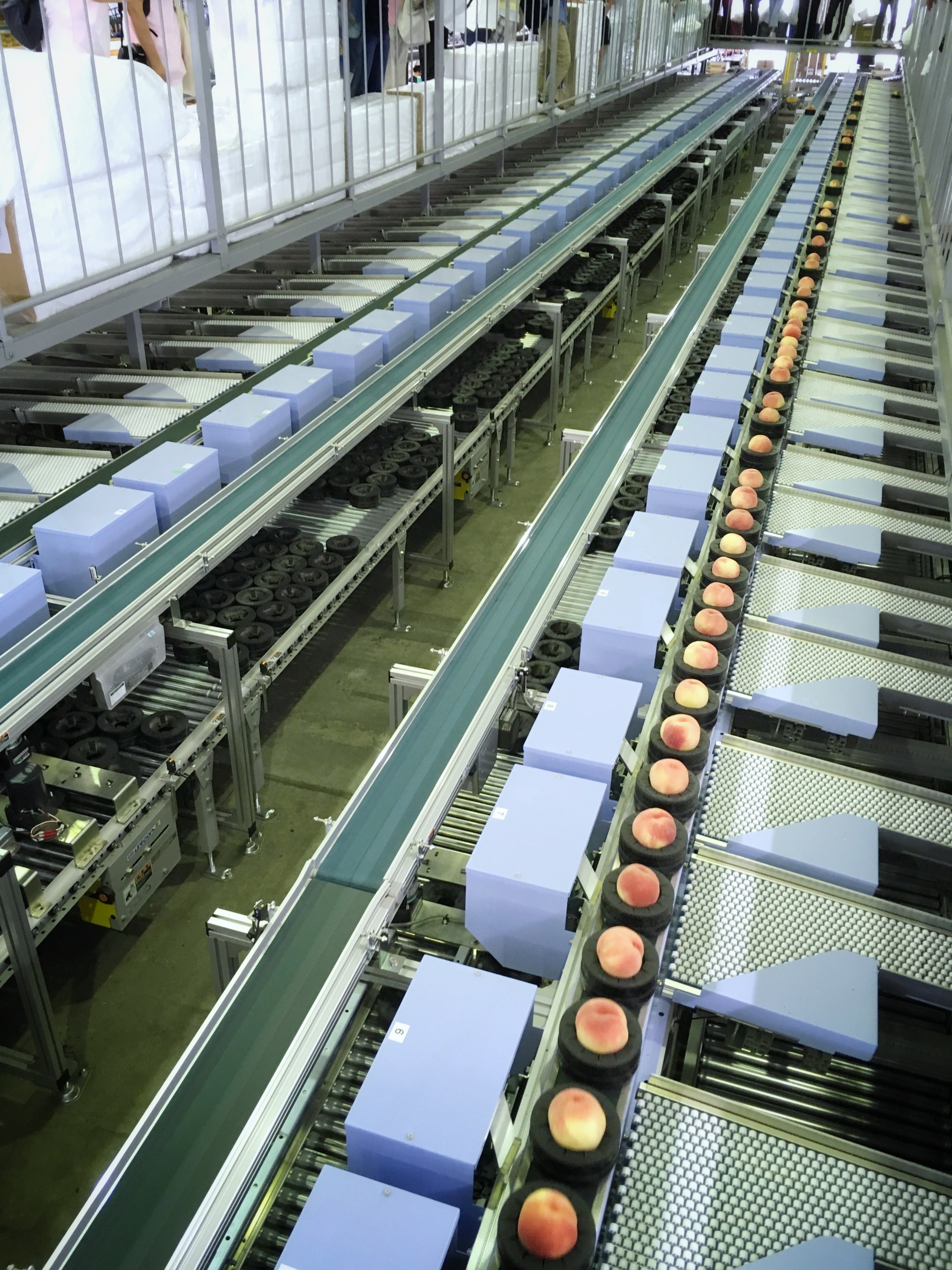 Within this place, a method using a light sensor is used to select which peaches are of which quality.
Up until now they’ve always used the shape and color of the peaches to separate them, but the new equipment allows them to use light to determine and measure the sugar content within the peaches.
The peaches are separated into 3 groups which equate to the rankings of average, above-average and best, however the peaches that get into the “best” ranking tier is apparently less than 1% of the entire harvest.
This new technology which allows you to determine and measure the sugar content within the fruit seems to be one of the reasons that the peaches are Japan’s best. 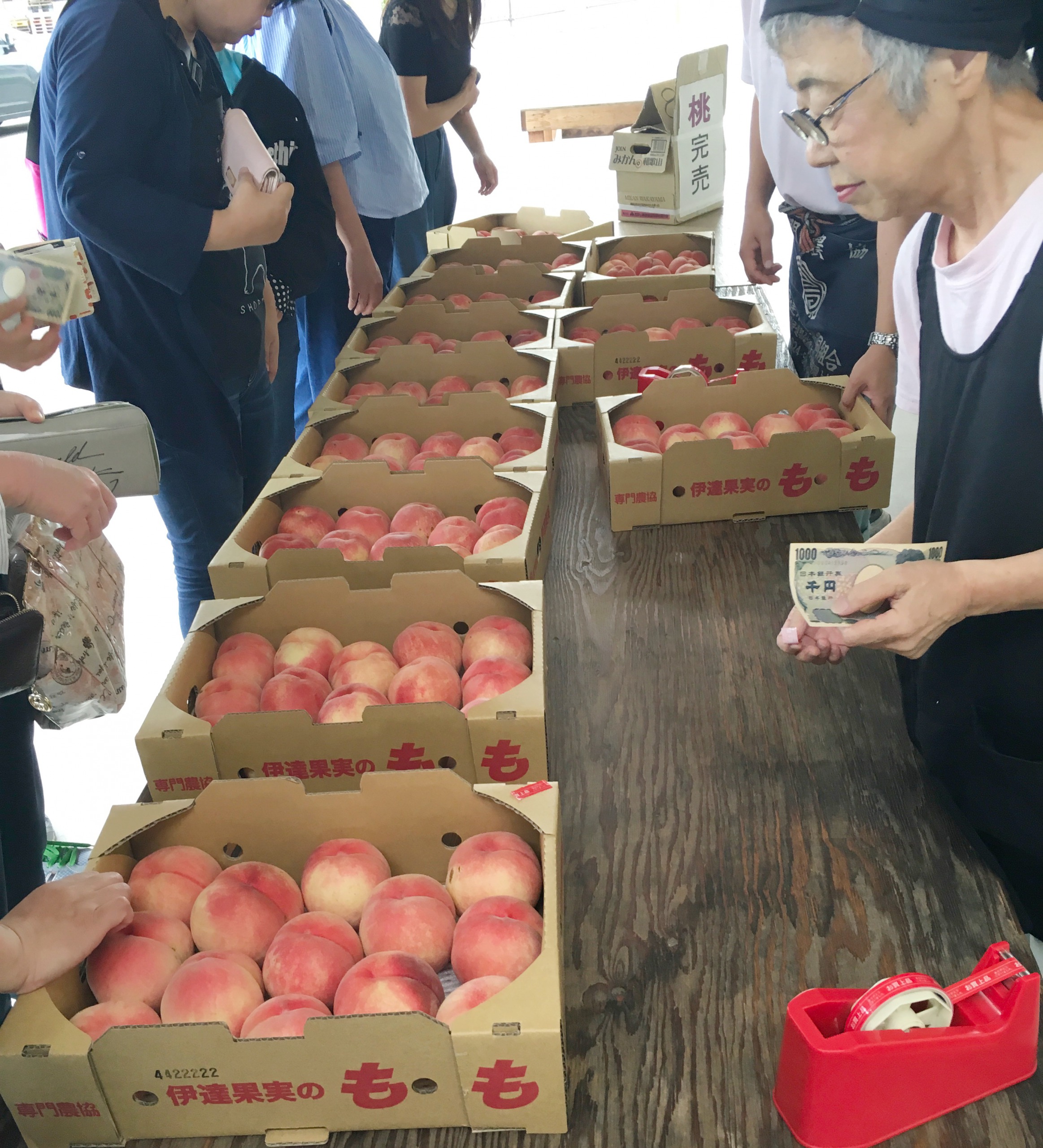 The peaches that have damage on them or have a strange shape are separated and sold at a nearby store.
Due to the flavor of the peaches still being the same but for a very cheap price it seems as though these peaches that are separated from the usual batch and sold at the shop are very popular, there is even rumors that the shop that sells these deformed and damaged peaches makes over a million yen every single year.
As you can see in this picture, a single box of peaches costs 800 yen.
That means about 60 yen per peach, that’s the cheapest I’ve ever seen them!!

Experiencing the harvesting of the peaches

After finishing up seeing and learning about the selection process of the peaches, we then visited the place where the peaches are grown. Whilst visiting we were given the opportunity to experience how these fruits are harvested after being grown.
In truth, this farm is actually not a normal peach farm. They are specially growing peaches that are to be presented to the royalty of the country!
And of course they are the best in Japan! It seems as though some royalty came to visit the year before last, and I was able to hear a little anecdote from that time. 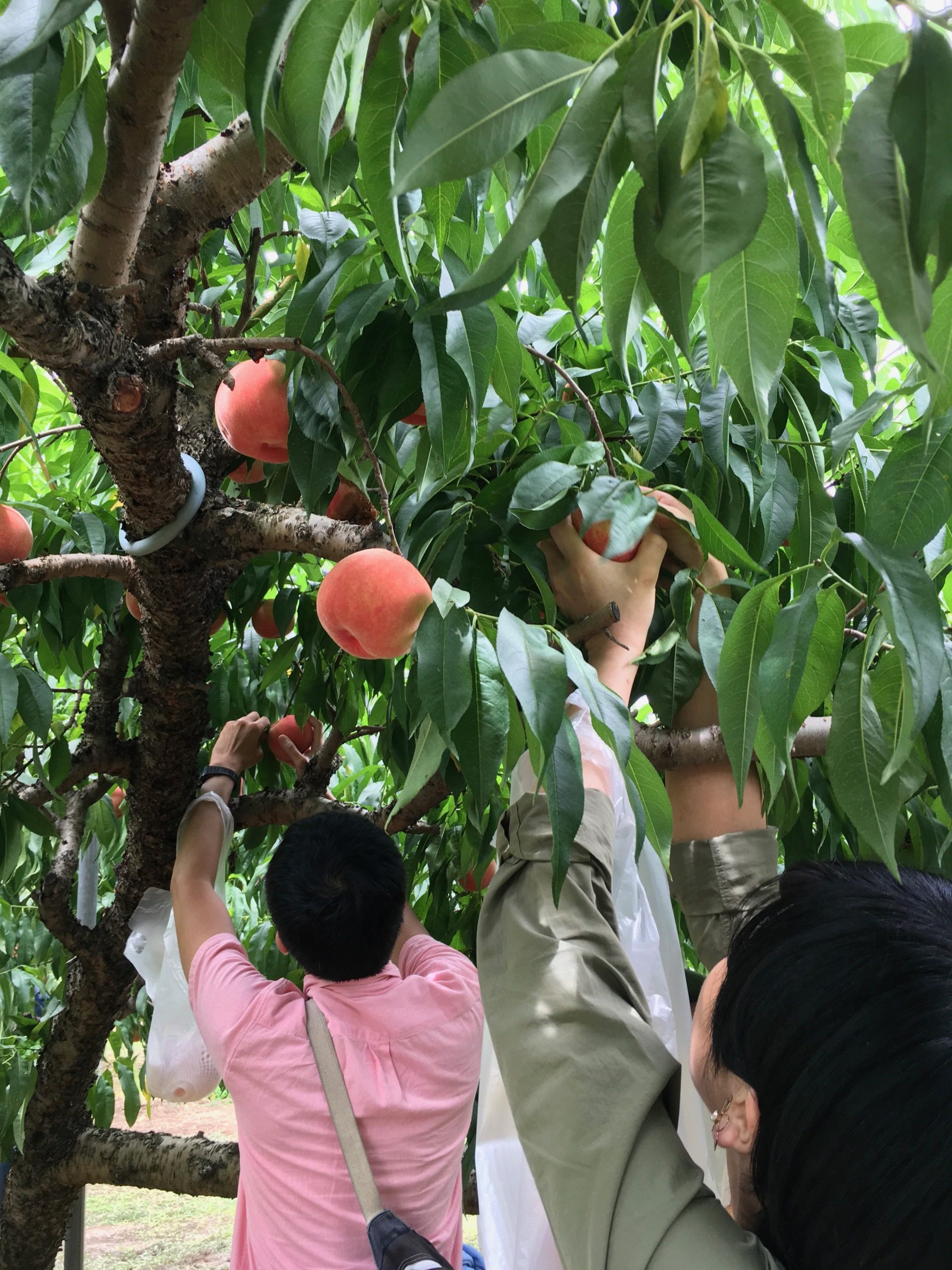 After the expectations for these amazingly delicious looking peaches had reached its peak, we finally started our gathering! It seems as though the most delicious peaches with the most beautiful color are usually in the highest places in the tree.
To try and take even just a few of the best peaches from the highest places, all of the people taking part in the tour worked together and tried their best!
Actually plucking the peach from the tree is not a difficult task at all and as such anyone can come and enjoy this experience. 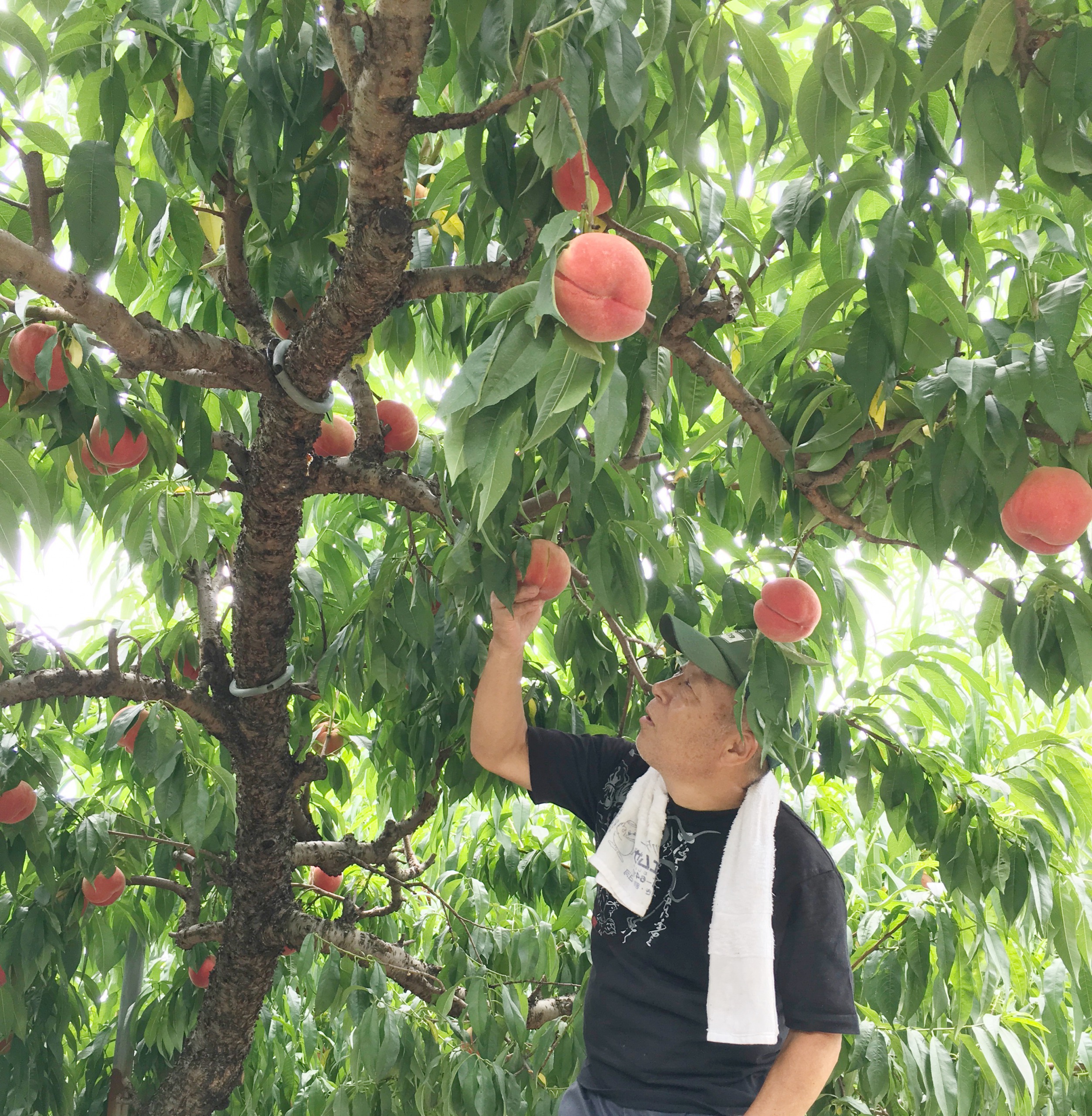 Listening to the words of the farmer Hayashi, it seems as though there is a secret method in which one can definitely make some of the most delicious peaches possible.
Even though I was interested in what it was since it’s a secret it can’t be helped…! The peaches we took today are ones that have been taken from the same tree where the peaches that are presented to royalty are taken from and due to this just a single peach can run you more than 2000 yen! 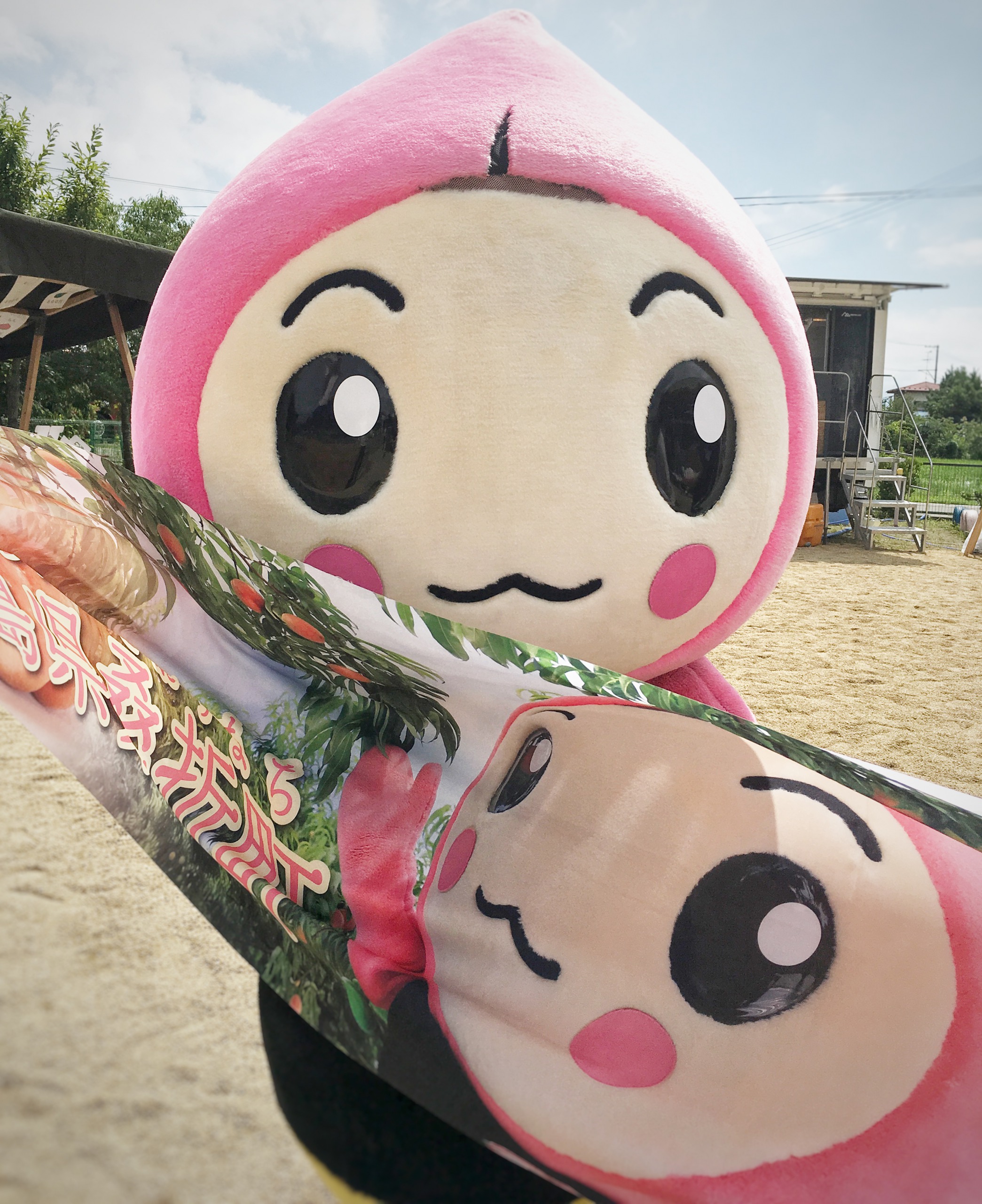 The morning part of the tour finished, and it was about time we all got some food, so we headed towards the food hall. When we arrived a cute character called “Hotapi” came running towards us. 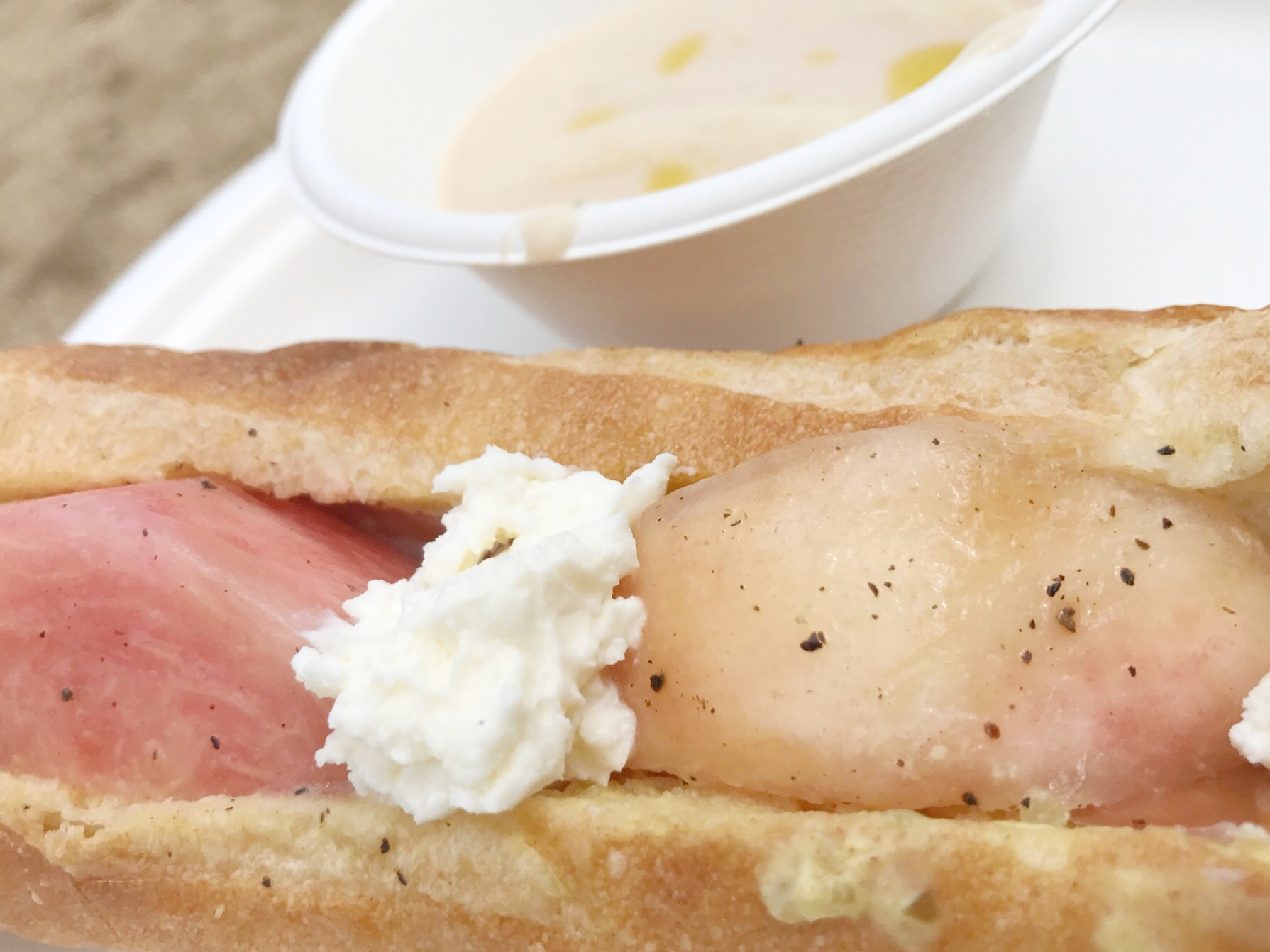 Our lunch was part of the “Peach” tour special menu, I had a “Peachdog” as well as some peach soup.
With some hard bread as the base the “Peachdog” (A name I created myself), was created with the sweetness of the peach as well as the stickiness of the cheese and the taste of dry-cured ham, it was a very strange flavor.
Lined up next to my “Peachdog” was some peach soup, it had consommé soup as its base giving it a slightly sour taste but at the same time the peach allowed you to have a sweet sense whilst eating. 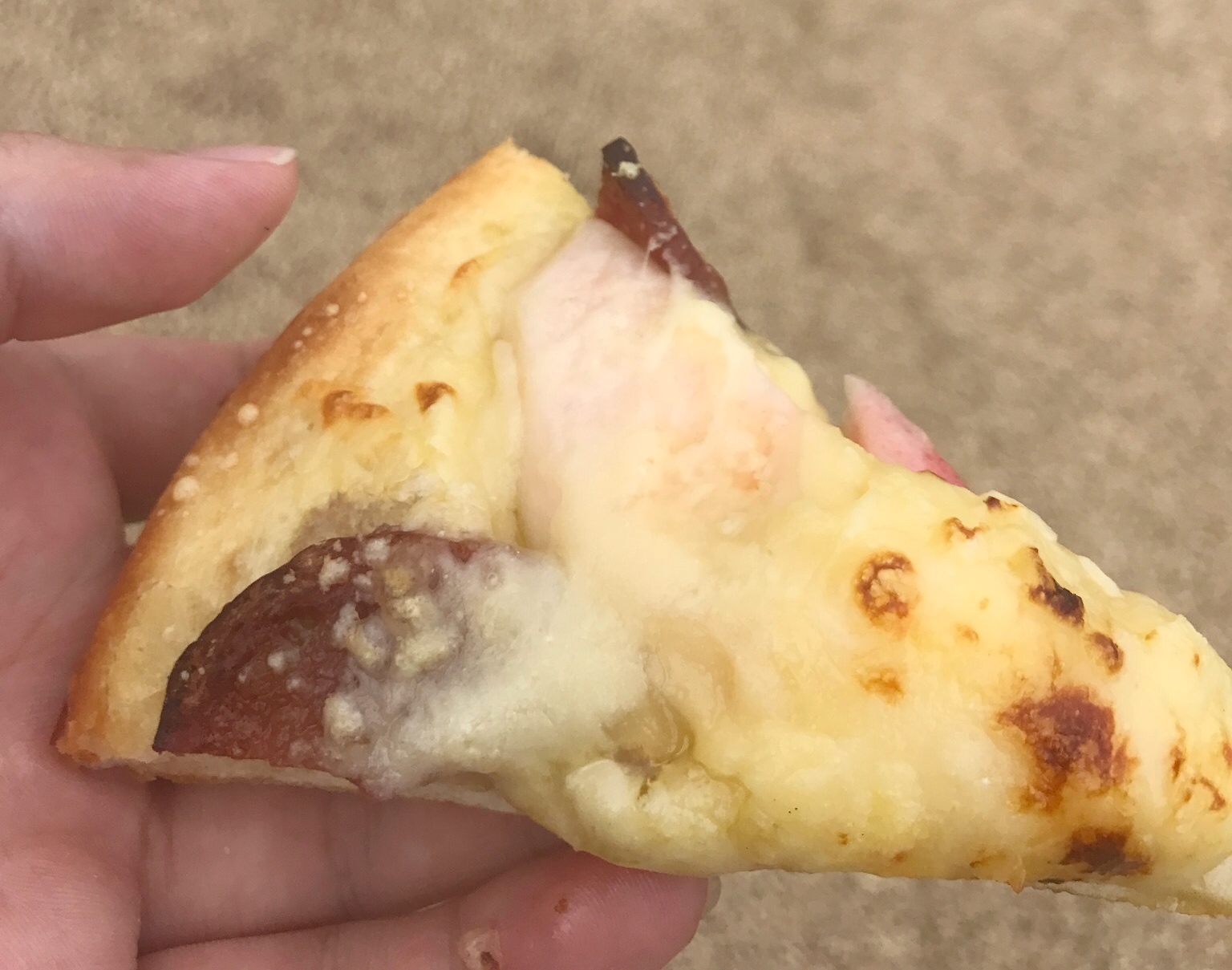 The pizza which I got instead of some sweets or snacks, was like a normal pizza except with peach hidden inside that suddenly surprised you as you ate, it felt as though the peach allowed the heaviness of the cheese to be reduced a little as you ate.
Personally it was a strange taste for me, but the thing I can say for certain is that no matter what you ordered it was going to be delicious.

Taking a shrine visit to the Suwa shrine after eating. 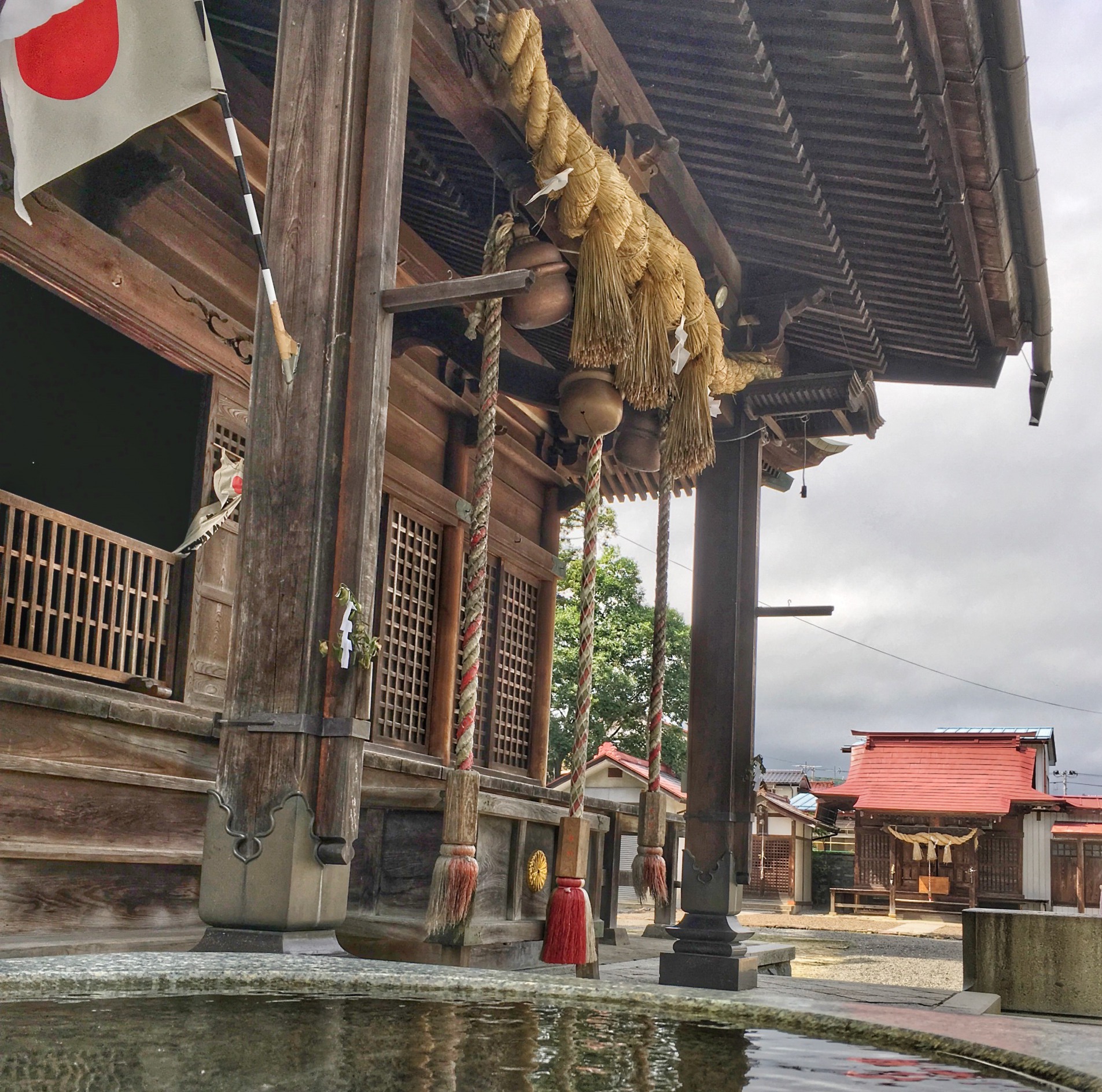 After filling our stomachs with the peach cooking, we took a visit to the Suwa Shrine. 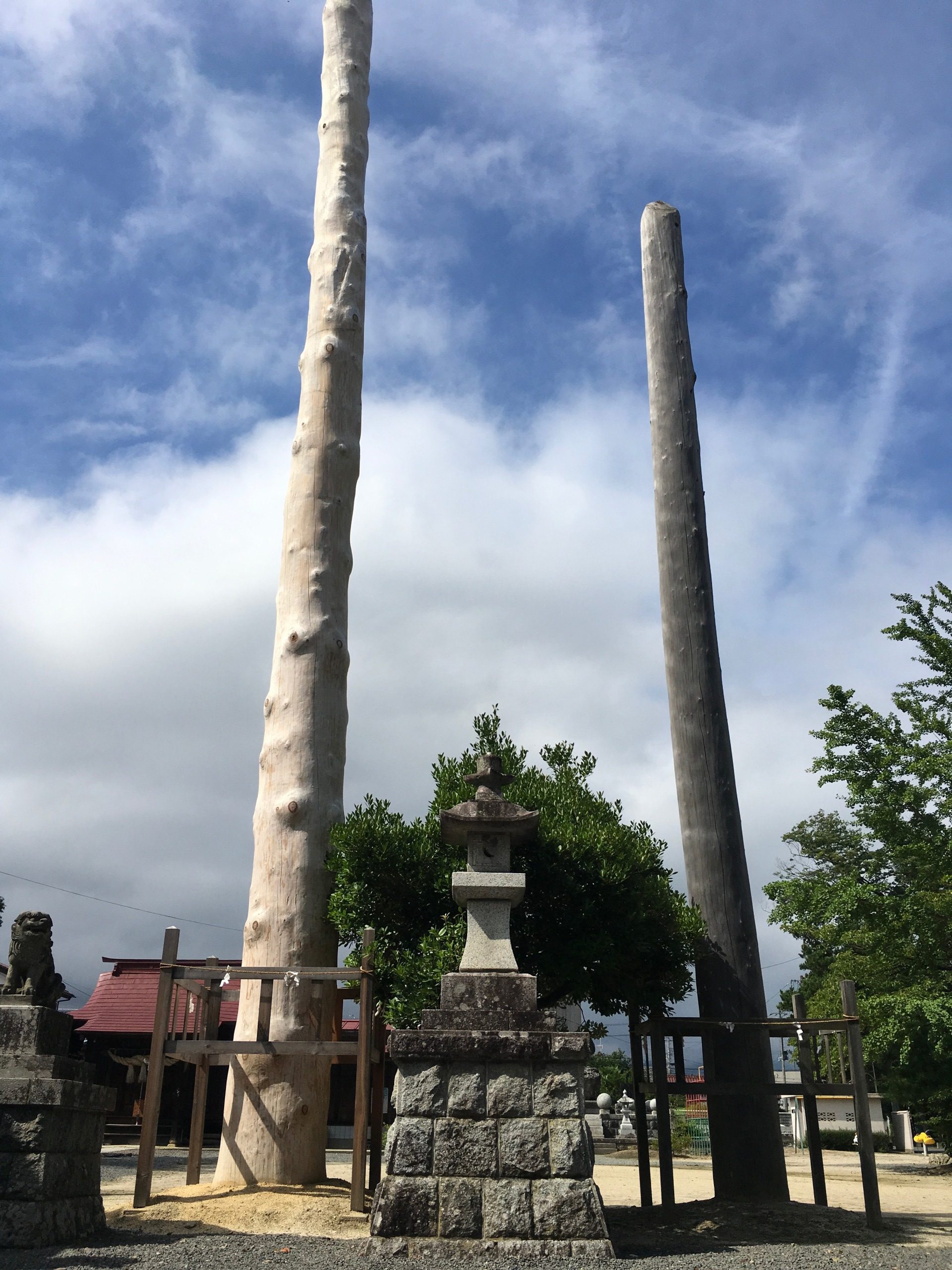 The two large wooden poles that stand at this shrine are called “Onbashira Festival logs”.
Once every 6 years, a huge log is chopped from the mountain and chosen to be part of a festival, the one on the right was cut around 7 years ago and the one on the left was cut just last year. 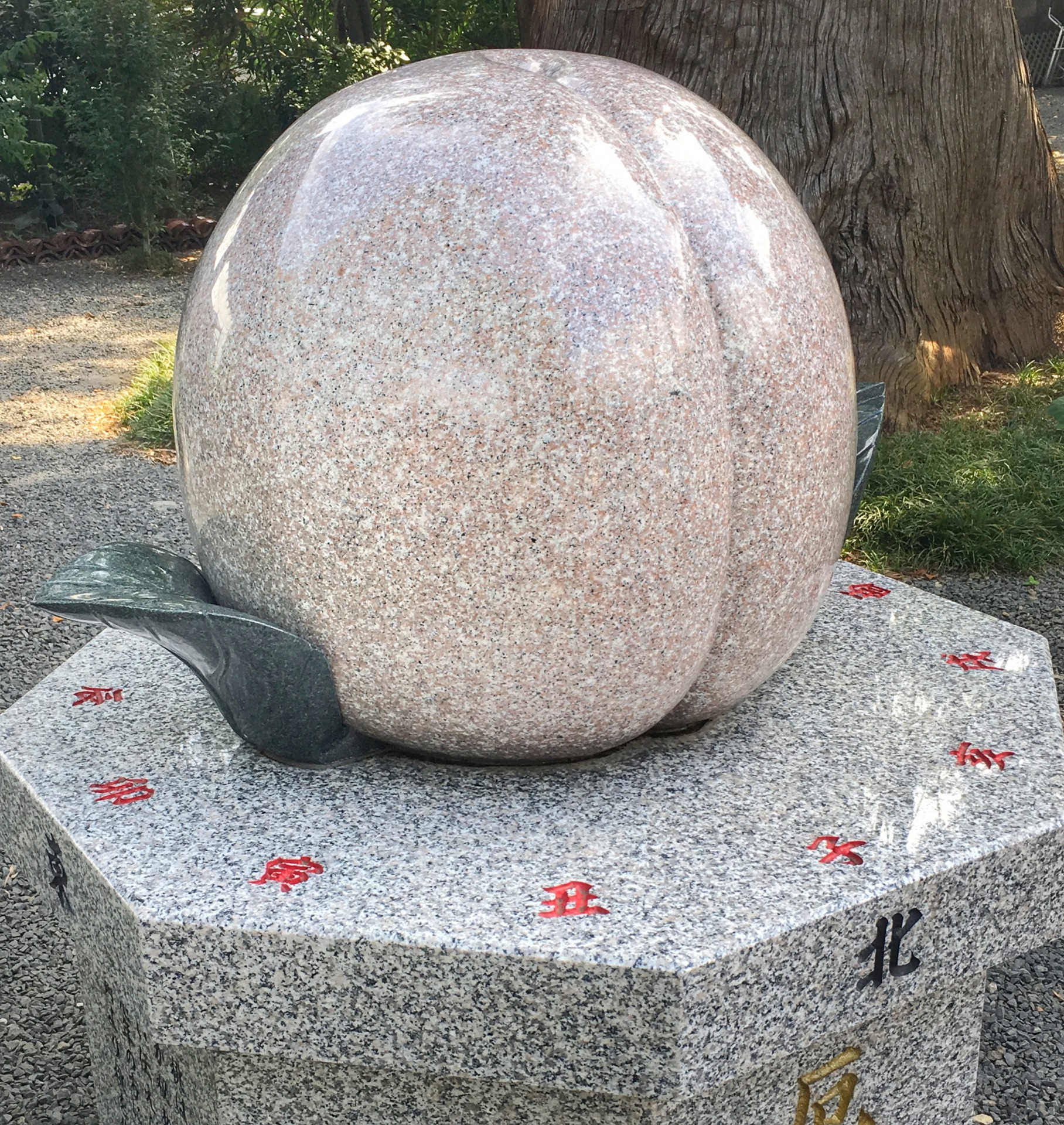 Even at this shrine, peaches are a huge component.
There is a stone statue of a peach here.
It is believed that if you take your birth year from the kanji written around the stone and touch the stone whilst standing in front of that number that it will protect you from danger.
I also decided to try this, found my birth number and touched the stone hoping for this effect.

Lots of content other than peaches within the tour

Up until now we had visited all of the places that had a relation to peaches, but of course there are some contents within the tour that are not to do with peaches. 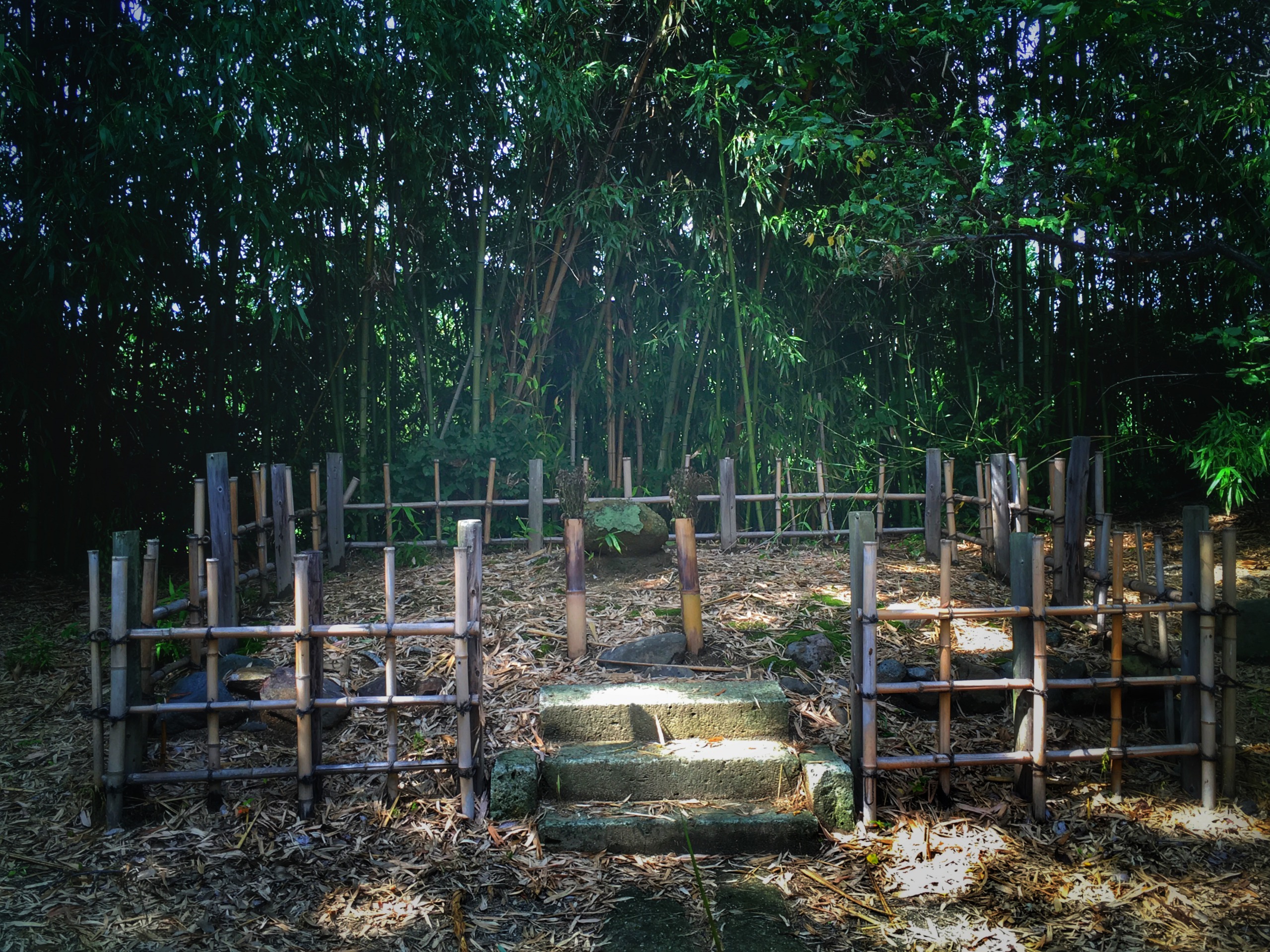 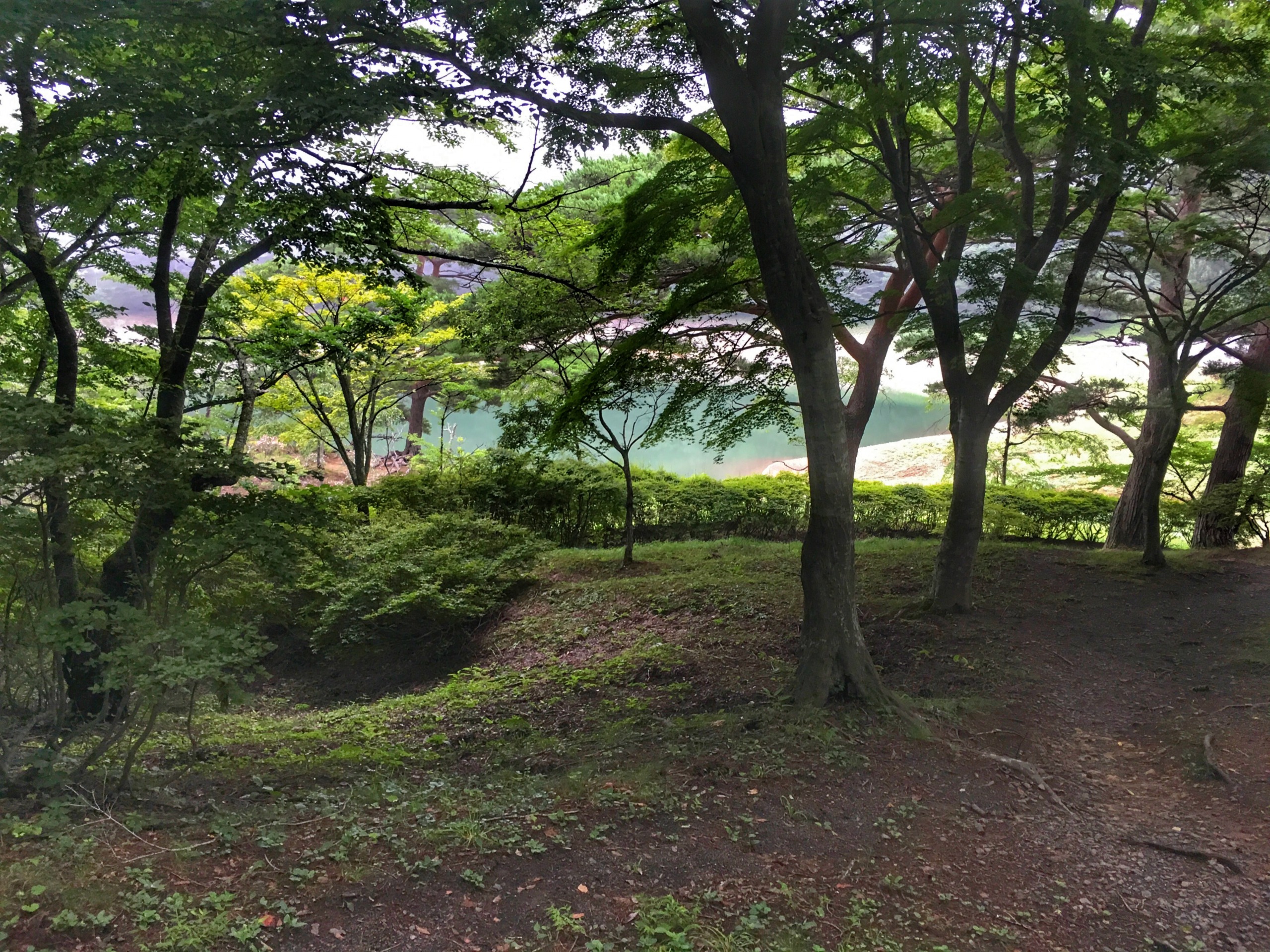 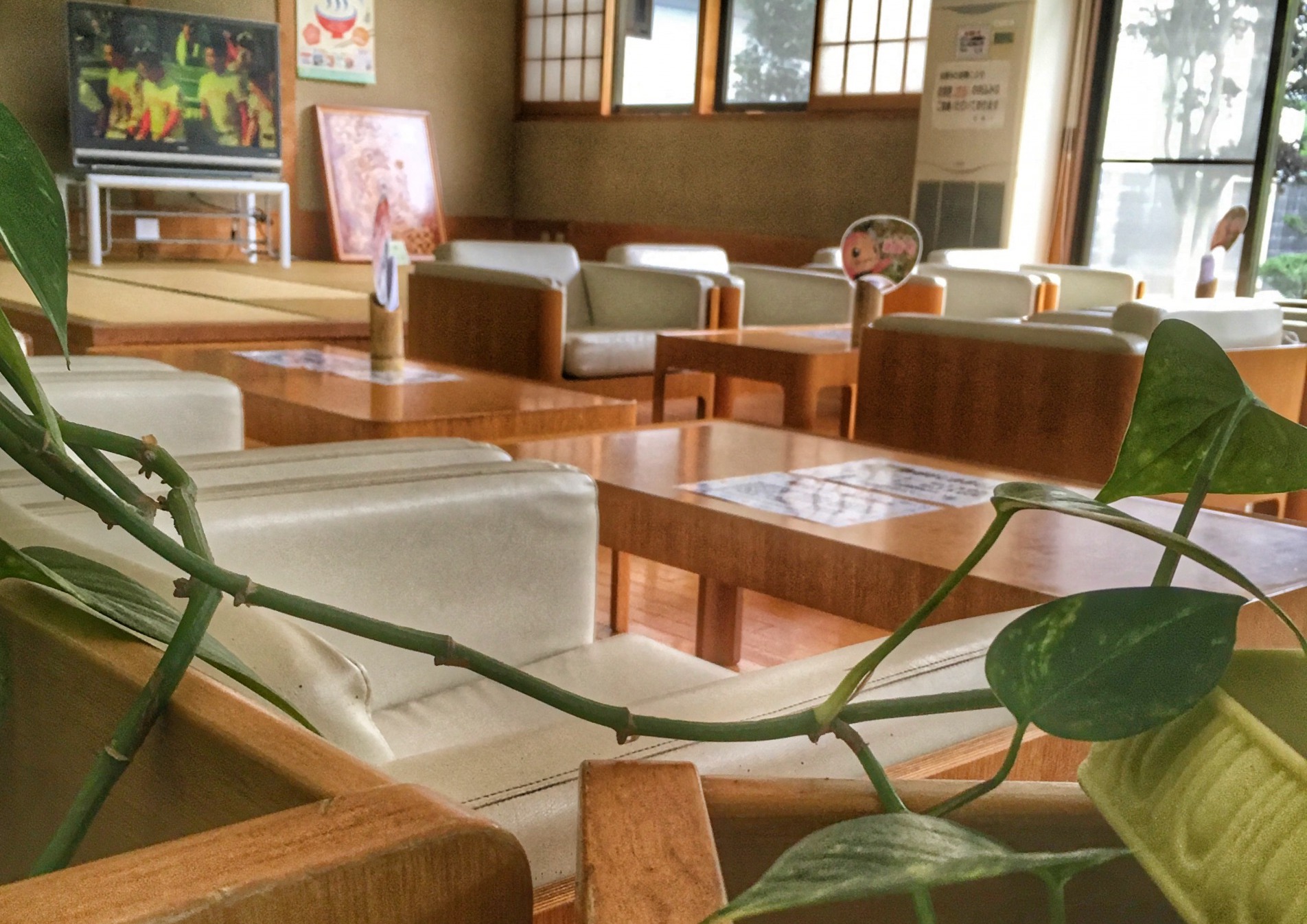 Hot water that makes your skin beautiful, calming atmospheres as well as alluring countryside scenes, there are many different things you can experience during this tour.

Definitely not something you’re able to complete in only 1 day’s worth of touring.
I would love to take the time to come for a second tour. 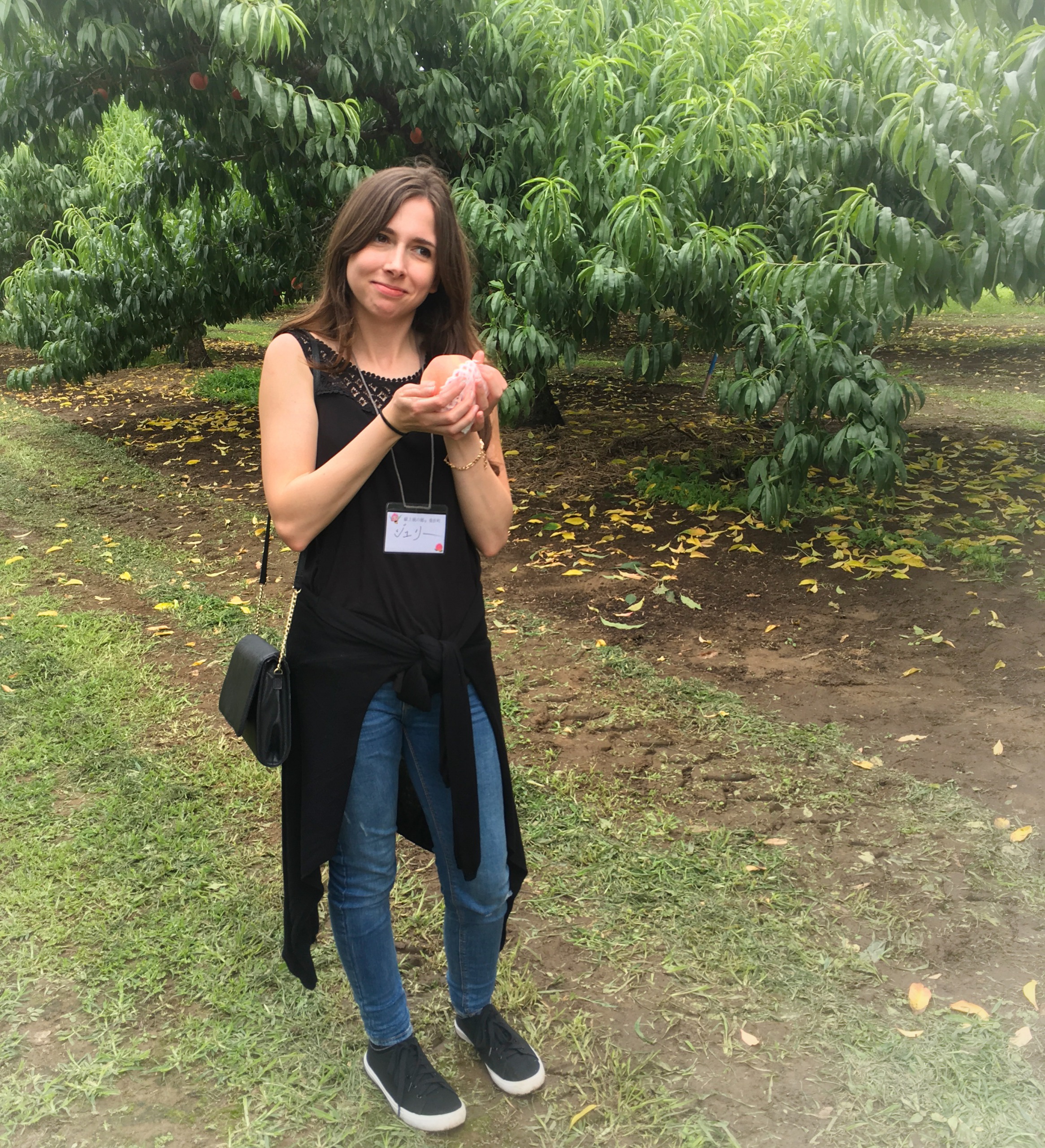 If you participate in this “Peach” tour, there’s no doubt you will become a master of information with regards to peaches by the time it ends.
Even the foreigners who took part in the tour said that they were able to look about the gathering, selection, sales and special preparation of the peaches which was a fun experience.
Koorimachi is in the center of the north-eastern part of Japan and can be reached in about 1 hour by train from Sendai.
How about taking a visit for yourselves?
I’m sure it will be a day you will never forget where you will be charmed by Koorimachi’s peaches!